Entergy coordinated closely with Mississippi Public Service Commission staff and the Commission’s outside consultants to stall regional transmission projects, potentially blocking its customers’ access to lower-cost wind energy from outside Entergy’s service territory and placing them at greater risk of future power outages.

Entergy’s attempts to stifle regional transmission developments have national implications, as the Biden Administration, federal agencies and Congress are beginning to consider policies that would catalyze investments in transmission lines that would save customers money, make the electric grid more resilient, and aid in the transition from fossil fuels to renewable energy.

The Mississippi PSC retains outside consultants Valerie Green from the firm Pierce Atwood, Nicholas (Nick) Puga and Collin Cain from the firm Bates White, and William (Bill) Booth from the firm Michael Best to represent the Commission on issues related to MISO. MISO operates the grid and is responsible for transmission planning in a long strip of states stretching from Minnesota and North Dakota in the North to Louisiana and Mississippi in the South. PSC Staff members David Carr and Sam Mabry led the PSC’s engagement with MISO; each of the outside consultants coordinated with Entergy, sometimes without the presence of Carr or Mabry, according to the records provided by the PSC to EPI.

The consultants charged the PSC more than $1.3 million from January 2020 through July 2020, according to the latest records provided to EPI. Those costs are passed down to Mississippi’s utility customers on their monthly bills. Some consultants, such as Puga and Cain of Bates White, charged more than $500 per hour.

Entergy’s work to influence the Mississippi PSC appeared to focus on MISO’s transmission planning effort, known as MISO Transmission Expansion Planning (MTEP). MTEP is typically completed each year to identify cost-effective regional transmission projects. The 2020 MTEP, known as MTEP20, was shut down early over a dispute between stakeholders regarding how future scenarios were developed, and effort was redirected toward MTEP21.

Entergy submitted draft versions of its transmission planning comments to regulators across the Entergy service territory and, at one point, asked Mississippi PSC staff to distribute transmission-owner comments to fellow Entergy-area regulators for what appeared to be “alignment” of their respective positions before MISO.

Some transmission projects under consideration by MISO, which have been contentious according to RTO Insider, would increase the ability for plentiful wind in MISO North to reach MISO South territory. That could threaten Entergy’s ability to justify building new power plants in its own service territory which earn regulated profits for the utility. Records show, but do not detail, Entergy’s meetings with commission staff and consultants to discuss cost allocation.

Entergy’s heartburn could be over what is known as “multi-value projects” whereby state policy decisions, such as a renewable portfolio standard, may require new transmission to be built. In such a case, MISO’s cost allocation principles could require other utilities to pay for some of the upgrade if they derive some benefit from the project.

Entergy had previously used a covert agent, Dave Harlan of Veriquest Consulting, to pose as a “MISO South customer” but to advance Entergy’s interests during MISO stakeholder meetings, a fact that both Mississippi PSC staff and its consultants knew but did not disclose.

One of the consulting firms, Pierce Atwood, submitted names of potential conflicts of interest to the Mississippi PSC prior to being awarded a contract, but the PSC declined to make the information available to the public in response to EPI’s request. The PSC’s contract with Pierce Atwood allowed the consulting firm to maintain relationships and engage new clients, even if those clients had interests “directly adverse” to the interests of the Commission.

The Mississippi PSC will host a “discussion and possible action” about Entergy’s membership in MISO at its April 6th monthly meeting starting at 10 AM central time.

Entergy’s history of using its transmission system to block competition

Entergy has attempted to erect barriers to regional transmission for years; its efforts were the subject of a federal investigation by the U.S. Department of Justice (DOJ) as early as 2010, a fact that the company initially hid from its Mississippi regulators.

Entergy was supposed to divest its transmission system to ITC Holdings over a decade ago in order to satisfy the demands of federal prosecutors who accused the utility of anti-competitive practices. The DOJ said that “Entergy’s commitments to obtain membership in an [regional transmission organization] RTO and divest its transmission system […] will address the Antitrust Division’s concerns by eliminating Entergy’s ability to maintain barriers to wholesale power markets, ensuring that all Entergy service area generation is dispatched independently and at lowest cost, increasing market transparency and oversight, and properly aligning incentives for the construction of transmission.”

Entergy never divested its transmission system, but it did meet the DOJ’s other demand to join an RTO.

At the time, observers initially believed that Entergy was a better fit for the Southwest Power Pool (SPP), rather than the MISO, because Entergy had better transmission ties to SPP which could deliver more savings to the utility’s customers.

DOJ subpoenaed a copy of cost-benefit analyses Entergy had conducted which evaluated the differences between the utility joining SPP or MISO. The analyses showed as much as $130 million cost savings over a ten year period for Entergy, and ultimately the utility’s customers, if it chose SPP.

Entergy instead chose to join MISO, creating MISO South, which put the utility effectively on an island with limited ability to move power back and forth between its service territory MISO North. Only a 1,000 megawatt (MW) tie exists between MISO North and MISO South, compared to more than 14,000 MW of interconnections between Entergy and SPP.

Recent cold weather events in Texas and throughout much of the South-Central U.S. underscored the need for robust transmission ties linking geographically diverse areas of the country. MISO South’s relative lack of interconnections to nearby grids, and to MISO North, may have contributed to Entergy’s rolling blackouts of more than 200,000 customers in Arkansas, Louisiana and Mississippi.

Immediately after Entergy joined MISO, the RTO began experiencing what grew to a more than 5-fold increase in the amount of time required to complete its annual transmission planning, rising from 1,011 hours in 2014 to 5,844 hours in 2018, MISO’s staff reported. Despite the precipitous growth in hours spent on planning, MISO South regulators, led by Mississippi, wrote a letter to MISO in 2019 asking it to slow down even more. 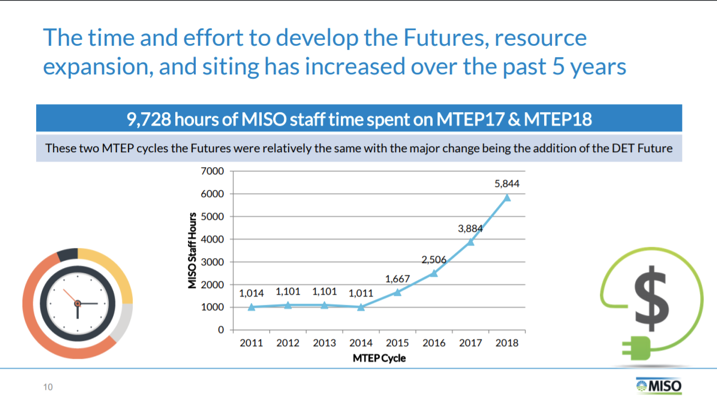 The Biden Administration’s $2 trillion infrastructure blueprint is prioritizing transmission investment to unlock greater renewable energy development and make the  grid more resilient. In a fact sheet released on March 31, the Administration called on Congress to create a transmission tax credit to support at least 20 gigawatts of high-voltage power line development.

While investor-owned utilities can own and profit from transmission lines, the monopolies have historically favored building local transmission within their own service territories, and have conspired to stymie efforts to open up regional transmission planning processes.

In a January 2021 article submitted to the Energy Law Journal, Ari Peskoe, Director of the Harvard Electricity Law Initiative, chronicled how investor-owned utilities have evaded decades of efforts by federal regulators to increase competition in transmission development,stifling much of the transmission build-out now required. After a 2011 order by the Federal Energy Regulatory Commission requiring utilities to engage in regional planning, IOUs largely returned to proposing transmission investments within their state-granted territories, where they were exempt from competitive pressures.

A March 2021 paper by Concentric Energy Advisors also highlighted deficiencies in RTO transmission planning, which it called, “essential to the efficient and least cost deployment of U.S. solar and wind resources.” The paper called for swift action, arguing that the “window may be closing to develop the needed transmission expansion to enable optimization of clean energy, meet state clean energy objectives, and other “voluntary” demand for low-cost renewable energy.”

Note: A full inventory of the documents EPI obtained via public records requests of the Mississippi Public Service Commission can be viewed here.

Daniel Tait is a Research and Communication Manager for the Energy and Policy Institute.