Florida Power & Light (FPL) and Duke Energy are getting an early jump on 2018 political spending compared to the last midterm election, according to records from the Florida Department of Elections. The majority of the money is finding it way to Adam Putnam’s political action committee (PAC), Florida Grown, and other Republican-allied firms. 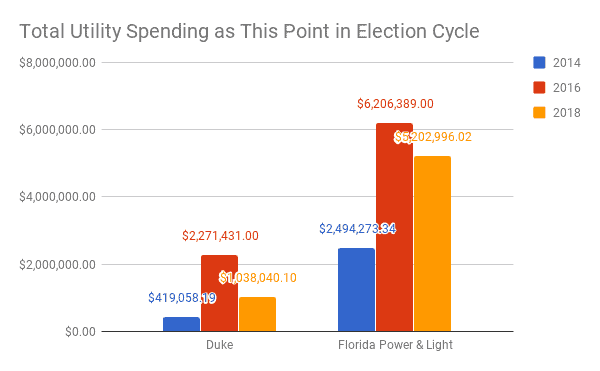 The two utilities funnelled the money through 14 PACs. Two smaller investor-owned utilities in Florida, Gulf Power and TECO, also contributed to some of those PACs.

Florida’s investor-owned utilities are in business to make money for their shareholders, and the increased investment in political contributions suggest they view such investments as profitable.

Who occupies the governor’s mansion, and that person’s posture toward Florida’s energy policy, will have major consequences for FPL and Duke. The governor of Florida appoints the state’s five-member Public Service Commission, which regulates the utilities and decides whether they can raise rates, build new infrastructure, and how much they profit. The current PSC has issued decisions mostly in line with FPL and Duke’s agenda, leading an independent watchdog to accuse its members of being “captured” by the utilities.

While Florida law limits the amount utilities can contribute directly to candidates, FPL and Duke skirt that requirement by giving to PACs that support specific candidates or political parties. Florida Power & Light has contributed more than $500,000 directly to Florida Grown, the PAC for Republican gubernatorial candidate Adam Putnam, this election cycle.

After passing through the PACs, the utility contributions filter down to other PACs and political firms, almost all of which are spending money to elect Putnam and other Republican candidates.

Putnam’s Florida Grown racked up $3.4 million in contributions from utility-funded PACs. Florida Grown spent $1.8 million on a political consulting firm over the past two years, Silloh Consulting, according to the Miami Herald. Silloh never disclosed how it spent those funds, which is “potentially a violation of the elections code”, according to a former legal counsel for the State of Florida’s Department of Elections.

Watchdog PAC has received $1 million in contributions from utility-related PACs in this election cycle. Its website states that the PAC “was founded by Florida State Representative and House Speaker Richard Corcoran”, the Florida House Speaker, and “will advocate for conservative public policies and will support and promote candidates who share Richard Corcoran’s vision of strong conservative leadership for Florida”.

OnMessage, Inc., a public relations and advertising firm with out-of-state locations in Annapolis, MD and Alexandria, VA, has received the most money from the PACs that Duke and FPL have funded, receiving more than $4 million from the PACs. OnMessage works with Republicans and conservative groups and states, “Our people believe in what we’re doing. We play aggressive offense.”

OnMessage’s founding partners are Wes and Curt Anderson and Brad Todd, and all three have significant ties to Republicans across the country. Wes conducted polling for Governor Rick Scott during his “razor thin victories over Bill McCollum (primary) and Alex Sink (general)” in 2010.

Multi Media Services, Inc. earned $2.4 million from utility-funded PACs. Multi Media Services’ website states it works with Republicans and its Media Director, Neal McDonald, states his prior experience “includes time on Capitol Hill working for a United States Congressman and lobbying the Florida Legislature.” Its website also features a testimonial from Curt Anderson of OnMessage, saying “Multi Media has always been there to see our campaigns through to a successful conclusion”, underscoring the connection between the two firms. Daniel Tait is a Research and Communication Manager for the Energy and Policy Institute.