Update: The OUC Board voted unanimously to approve the EIRP in its current form at its meeting on December 8.

The Orlando Utilities Commission is set to discuss and potentially vote on its Electric Integrated Resource Plan, the utility’s long range plan that determines its energy resource mix, at a meeting scheduled for Tuesday, December 8 amid concerns about the plan’s continued reliance on fossil fuels, inconsistent and low energy efficiency goals, and potential changes to reduce the utility’s net metering program. A draft plan was released on November 10, followed by a public hearing one week later.

The Orlando City Commission unanimously set a goal in 2017 to achieve 100% renewable energy by 2050. The effort was led by Mayor Buddy Dyer, who also holds a seat on the Orlando Utility Commission (OUC). The draft Electric Integrated Resource Plan (EIRP) did not recommend the city move to 100% renewable energy, but instead outlined what it called a pathway to “Net Zero CO2 Emissions” by 2050. The EIRP recommended that the utility meet its net zero goal by converting two coal plants to gas, adding new solar generation plus storage, and crediting increased electric vehicle (EV) use by 2050 to offset the emissions from the gas-fired conversions.

The resource plan suggests that it aims to take credit for emissions reductions achieved through an expected increase in electrified transportation in order to offset its continued emissions from the gas plants it builds.

Vehicle electrification would allow for “more flexibility on fossil-fuel generation” according to the EIRP. The EIRP would allow for the burning of fossil fuels via as many as three gas plants as late as 2050, which would require offsets in order to meet the “net zero” goal.

OUC’s EIRP is inconsistent with the International Panel on Climate Change (IPCC) pathways to limit global warming to 1.5° or even 2° Celsuis. The IPCC report noted that “A robust feature of 1.5°C-consistent pathways […] is a virtually full decarbonization of the power sector around mid-century, a feature shared with 2°C-consistent pathways.”

In other words, whether U.S. utilities are setting plans consistent with 1.5° or 2° scenarios – a difference that equates to extreme heat and sea level rise for hundreds of millions more people, full coral reef extinction, greater tipping point risks, etc. – either case requires all global electricity to reach zero carbon by 2050.

Limiting global warming to 2°C or below will hinge on electrifying transportation too, but the electricity flowing into those cars, trucks and trains will have to be fueled with zero-carbon power sources. OUC, however, projects that it would continue to emit carbon dioxide beyond 2050 should it adopt the EIRP as written.

The Institute for Energy Economics and Financial Analysis (IEEFA) filed technical comments last week criticizing OUC’s process as rushed, stating that the timeline had not allowed customers a “reasonable and fair opportunity” to review the EIRP. IEFFA also criticized the lack of supporting data in the EIRP, including for its projected fossil fuel generation, and the lack of details about the post-conversion operating and emissions performance of Stanton Units 1 and 2, the two coal plants that are slated for conversion to gas-fired plants in the draft EIRP. The EIRP included an exhibit in its appendix showing declining CO2 emissions, but lacked specifics on how OUC would achieve the decline. IEEFA stated “there is not adequate evidence to prove that the Optimized Portfolio can achieve the identified emission reduction goals.” 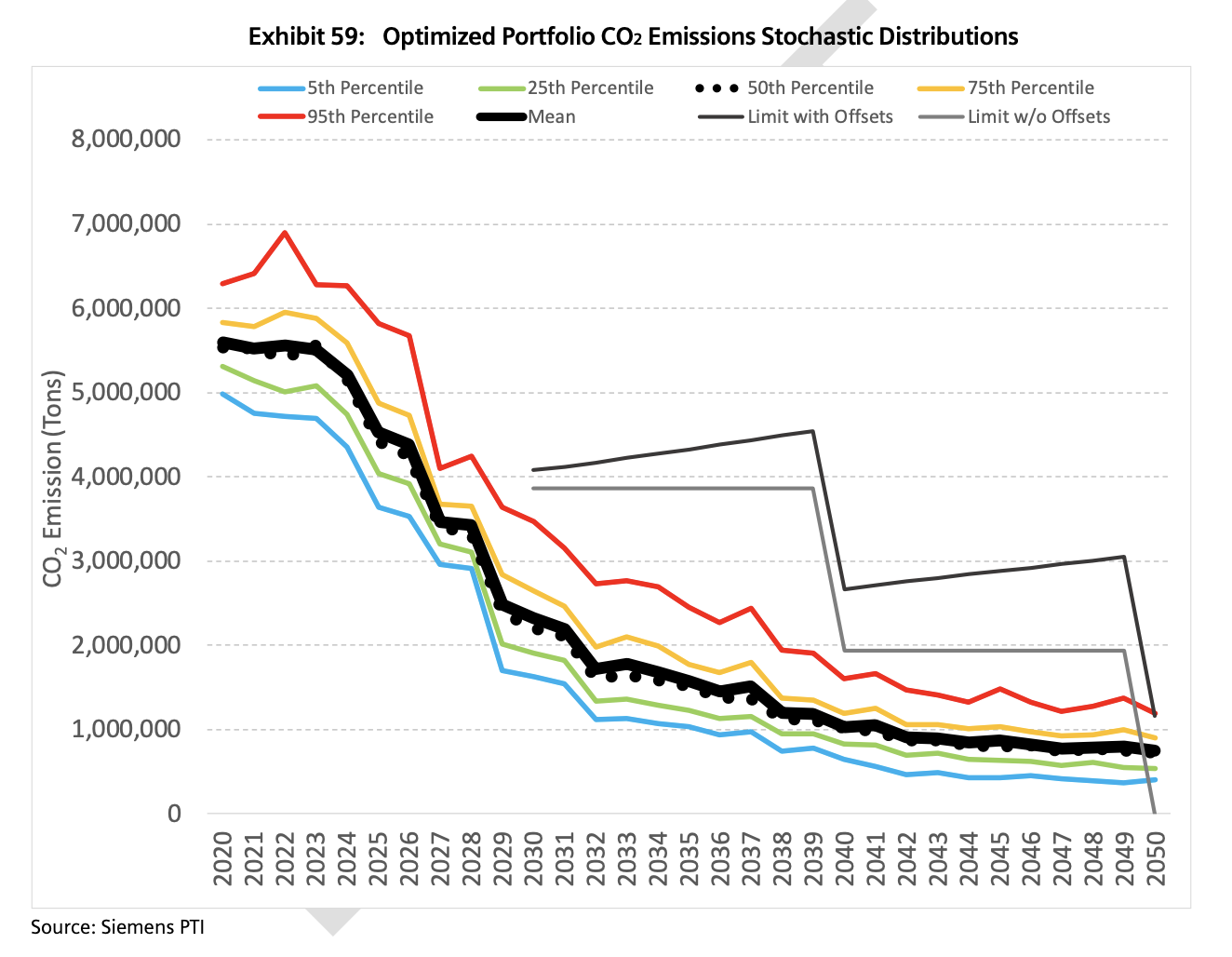 OUC’s EIRP forecasts a lower amount of both energy efficiency and distributed solar power. A coalition of clean energy and environmental justice advocacy groups in the Orlando area launched an online action sending letters to Mayor Dyer and the OUC Commissioners calling for a commitment to fully transition away from fossil fuels, increase investment in energy efficiency, and support rooftop solar.

OUC claimed its EIRP energy efficiency level “exceeds the requirements of the Florida Public Service Commission (PSC),” referencing the PSC’s controversial process to review its efficiency standards last year. The PSC is currently undergoing a rule-making process as the commission considers potential amendments to the standards, known as FEECA.

When questioned by the Sierra Club about the reduction of the energy efficiency goal, Linda Ferrone, OUC Customer Service & Marketing Officer, stated that the 0.5% figure was “conservative” but that they were “committed to 1% this year and next year,” despite the fact that the EIRP extends through 2050, according to an email shared with the Energy and Policy Institute.

The rooftop solar numbers are low as well, raising concerns among OUC customers, with some expressing concerns that the plan lays the groundwork to end net metering, a policy that supports distributed solar, as reported in the Orlando Sentinel. The EIRP referenced a study of distributed solar generation conducted independently by the National Renewable Energy Laboratory (NREL), commissioned by OUC. That study found that OUC could rely on up to 370 MW of rooftop solar, but in the EIRP, Siemens included only 65.5 MW for the next 30 years.

When asked about potential net metering changes by a volunteer representative from the Orlando chapter of Solar United Neighbors, Ferrone stated that “If we were to propose a change to net metering, it would be undertaken at a pricing workshop open to the public. At the moment, no workshop on net metering is scheduled.”

Ferrone went on to state that OUC “Chose a more conservative forecast because we can incentivize adoption, but can’t control actual customer investment in solar PV. Therefore, to ensure operational reliability to meet the power needs of all customers, we have to plan to generate enough energy to meet demand at all times.”

In an earlier email, Ferrone confirmed that OUC’s forecast for distributed solar was 65.5 MW, based on the NREL study. In that study, the 65.5 MW figure is associated with a “net-billing” scenario, which is a lower value than the current net metering program at OUC, which credits solar kilowatt hours at the retail rate. In the NREL study, a footnote indicates that “Net-Billing and TOU policies are assumed to begin 1/1/21.” Ferrone did not respond to questions from the Energy and Policy Institute about a potential shift to net-billing. 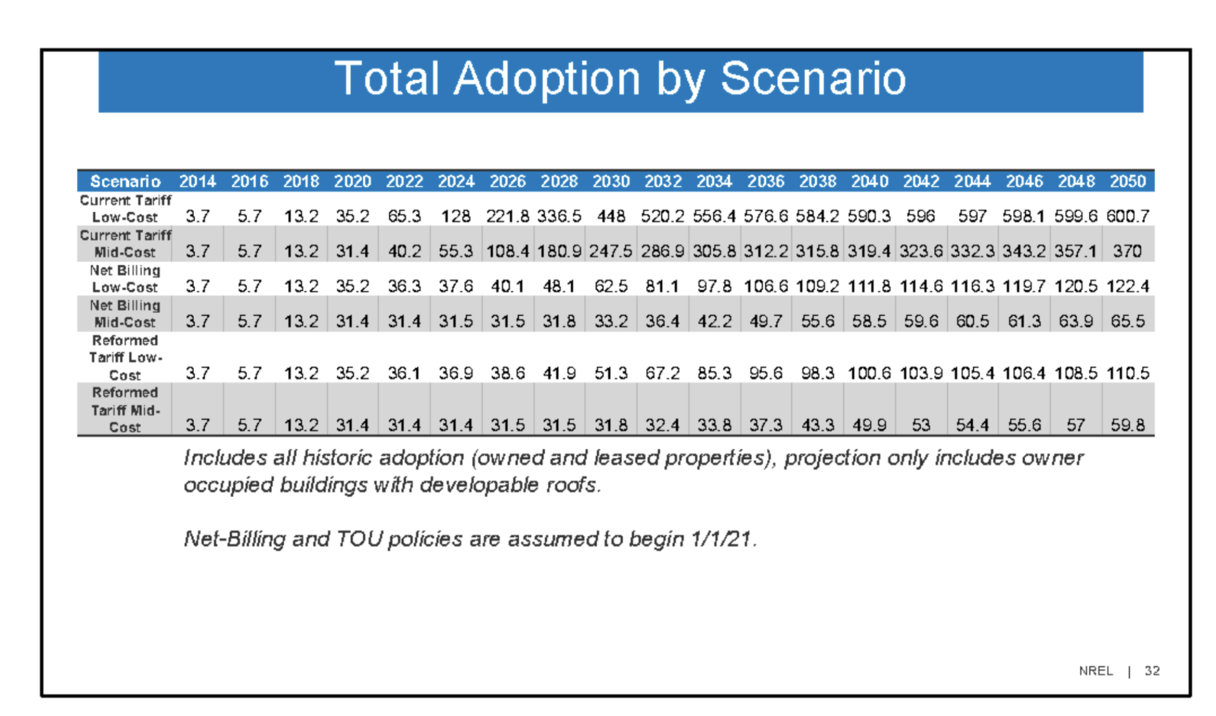 The choice to convert the coal plants to gas plants, rather than retire them, also led OUC to plan a lower amount of utility-scale solar investments. The EIRP stated that “converting the Stanton coal units instead of retiring them greatly reduces the need for solar and storage capacity, while still significantly reducing emissions.”

Alissa Jean Schafer is a research and communications specialist at the Energy and Policy Institute.